“Beton 2011 Ready Mixed Concrete Congress”, which has been organized by Turkish Ready Mixed Concrete Association (THBB), has been held in Istanbul Fair Center in October 20-22nd, 2011. 580 people has followed the Congress, where 58 memorandums have been presented under the following titles: Concrete Components and Design, Special Concretes, Production and Application Technology, Architectural Concrete Applications, Regulations and Quality Management Systems, Risk Management in Ready Mixed Concrete, Sustainability in Concrete and Life Cycle, Sectoral Problems. Parallel to the Conference, seminars and panels have also been organized.

The first opening speech of the conference has been made by Ayhan Güleryüz, President of Turkish Ready Mixed Concrete Association Executive Board. Ayhan Güleryüz has stated that “We are proud to create a platform that brings Ready mixed concrete, aggregate, cement and construction sectors together”, and he also stated that while Turkish Ready Mixed Concrete Association had 30 members when it was established, now it has 77 members and annually 80 million m3 of concrete is poured in Turkey. Güleryüz has touched upon the present situation of ready mixed concrete and said “Turkey has been ranked in the first place in concrete manufacturing for the last 3 years in Europe, and we are proud of it.” Ayhan Güleryüz, who emphasized the importance of high quality concrete in our country that is on the first degree seismic zone, has stated that the members of Turkish Ready Mixed Concrete Association are manufacturing high quality concrete, because THBB members are audited continuously by spot checking with Quality Assurance System audits.

Beton 2011 Congress has been supported by BASF Construction Chemicals as the ‘Main Sponsor’, and by Kar Beton, Nuh Beton ve Onur Beton as the ‘Official Sponsors’.

All New Products and Equipments Related to Concrete, Aggregate and Construction Sectors have been Exhibited in Beton 2011 Exhibition

"Beton 2011 Concrete, Aggregate, Construction Technologies and Equipment Exhibition", which has been organized by Turkish Ready Mixed Concrete Association (THBB) and Kalite Fair Organization, has gathered ready mixed concrete, aggregate and construction sectors in Istanbul between October 20 and 23rd, 2011. 58 manufacturers and suppliers, who provide service, machinery and equipments to ready mixed concrete, aggregate and construction sectors, have participated in this Fair, which has gathered national and international sector members and which has been held in Istanbul Fair Center Hall No 9-10 and 11.
The Fair is the pride of the sector with its success, and it has been followed by total of 14.160 visitors, especially the owners of ready mixed concrete, aggregate and construction companies, senior managers, professionals and collage students. As in the previous years, many professional visitors from Europe, Asia and Middle East have participated in the Fair, which has been held on 30.000 m2 of indoor and outdoor area. 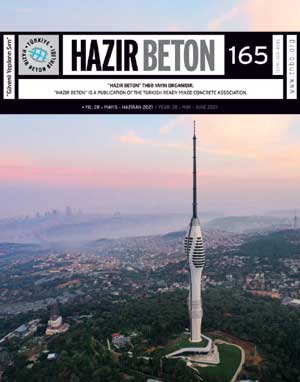