The stabilization of the currency through the increasing liquidity and interest reductions of the Central Bank has increased the predictability in the economy partially and it created a reanimation in the economy in the last quarter. According to the recent data disclosed, the economy of Turkey ended 2019 with 0,9% growth. If we view it on the basis of sectors, it is understood that especially the construction sector is distinguished from other sectors in a negative sense. The  construction sector closed 2019 with 8,6% shrinkage, with 3,8% experienced in the last quarter.

The national income series announced by TÜİK traces back to 1999. When we take a look at the values of the total 21 years, the construction sector, which contracted seven quarters consecutively in the 2008 global crisis period, has now ended its sixth quarter of shrinkage this year. That is to say, the losing party of  2019 became the construction sector.

Unfortunately, 2019 was also a highly challenging year for us as a part of the construction sector. According to TÜİK’s Ready Mixed Concrete Manufacture Index, the regression in the sector that functioned with 50% lower performance in the initial months of  2019 compared to the same month of the previous year progressed to become about 30%, and 7% recently in December. In no month of 2019 can any improvement be observed on an annual basis compared to 2018.

All indexes increased year-on-year according to the February report of the Ready Mixed Concrete Index that we prepare every month. Nevertheless, the performance of the sector did not increase visibly.

The economy of all countries started to be affected negatively due to the Coronavirus. The dimensions of the economic damage that will be brought along by such impacts will come to the surface in the forthcoming period. Turkey has taken the economic precautions to reduce the economic impacts to be posed by the Coronavirus and other geopolitical risks in that process, in particular the measures relating to the interest policy, in a timely manner. 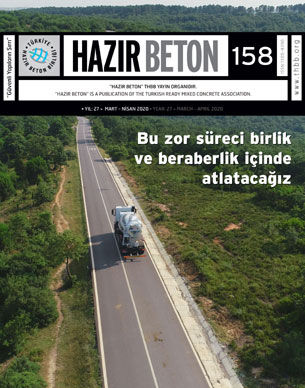